Over ten years ago, I took time off from college to work for Mother Teresa’s Missionaries of Charities in Addis Ababa, Ethiopia. My time there was life-changing, to say the least. Lately, in reading Angie’s accounts of her mission trip to India, I have been drawn back to my Ethiopia experience.

As an infant, Haylin suffered a high fever that left her bedridden and unable to speak. Every day it was my job to change her, feed her, bathe her, clean and bandage her bedsores, sing to her, love her. Haylin was the first to teach me how to communicate without words (thank you, Haylin) – she spoke with her eyes.

Nigist was a little girl with the happiest, most infectious laugh and legs that did not work. There was no wheelchair for her, so she got around by dragging herself across the floor. People would often accidentally step on her, and she would respond with giggles. I remember when she lost a tooth, she thought it was hilarious and laughed all afternoon.

One day I was holding Nigist on my lap. I absent-mindedly held out my arms to examine them. (At night I slept on a flea-infested cot, and I had accrued a myriad of bites on my arms. Nigist gazed up at me, and then clumsily licked her finger and began to rub her finger over each bite.) It was as if Jesus Himself were tending to my little pains. I will not, cannot ever forget Nigist.

(Many of the children in the orphanage regularly had their heads shaved with a razor blade because of head lice. That is why their hair is short in the above photos).

While I spent my days working at the orphanage, I lived and slept in the women’s quarters, where the female patients stayed. Many of the women suffered from various diseases such as HIV, malaria, leprosy, tuberculosis, and typhoid fever (I actually contracted typhoid while I was there). Additionally many of the women suffered from fistulas, which had a very foul odor associated with it. 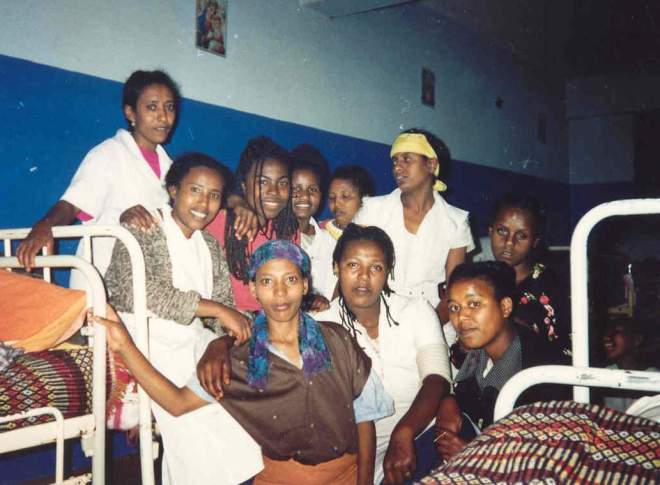 (I'm in a pink top, third from the left)

From Ethiopia, I have a lifetime of stories.

In fact, God often chooses to reveal Himself through those who are not wise by human standards, not strong, not noble.

He can make you a new creation, even wise, and strong and noble. Some may not recognize it, but others will see His glory in your life, on your face.

On becoming a new creation…

15 thoughts on “His Glory On Their Faces”