There were so many incredible things surrounding our experience at the Special Olympics Summer Games.

The morning of I had a moment of panic, wondering if we should just back out of the whole thing. The thought of trying to find parking on a busy day in the city, walking long distances with Rhema, the noise, the crowds, the unfamiliar, the waiting… I called my sister and she simply said, ‘No worries. I be there.’ (Yeah, she tries to talk cool.)

We got there just in time for the opening ceremonies. Rhema did so well throughout the meet; she was happy to color with her markers or play on her iPad or walk around a bit when she had to wait. She kept her leotard on. (!) She did all of the routines in her own Rhema style with Shea, her coach, supporting her all the way.

As I watched I remembered

…how she couldn’t stand the feeling of the mats beneath her feet and how she used to just run circles around the gym. 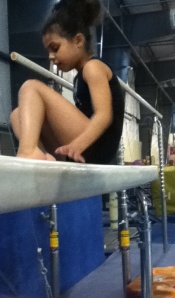 How she had no joint attention, didn’t seem to understand anything people said to her. How she could not follow one-step directions or do activities with a group.

I was/am amazed, so amazed to see how far she has come, to see what is possible.

And then this happened:

Watching the young athletes of the Special Olympics – all with various challenges and disabilities do their best, full of sparkle and joy… Watching those who coached (many of them young girls) guide their friends, cheer them and help them, step by step, side by side… it was just as it should be. And it was one of the most heartening, inspiring things I’ve ever seen.

Team Rhema and Shea (below) – their last time together like this. Thank you Shea for this gift.

“We are at our best, we act most in concert with what our Maker intends, when we give away in love to another…” (Law of the Gift, Pope John Paul II)

Two days later and we can’t stop smiling and talking about it. Hope begged me to take one of the medals to school and I said she could. Her teacher told me she asked her if she could share something with her 1st grade class. First Hope told them about the Special Olympics and then she pulled out Rhema’s team leotard and matching scrunchie (which she happily noted that Rhema kept in the whole time). Next she passed around Rhema’s medal and told them she placed 3rd overall for her age group. Hope told me her classmates were amazed. One girl said, ‘Wow, Rhema is super talented.’

It touched me deeply that Hope would think to do that on her own. She’s teaching her friends about her sister’s autism and showing them her many gifts.

A woman named Susan took the pictures of Rhema (above) on the podium. She found me and showed me the photos. Later she sent them to me with the words, “Your daughter is a shining star.” Instantly I was taken back to my little girl – seeming so isolated and hyperactive – running laps around the gym and holding on to a star.

Keep believing, friends. As my friend has reminded me again and again, anything really is possible. In a blog I wrote about many moons ago when Rhema got her first leotard (you can read it here – it’s part of the story), I say again: This is the message that has been *5* years in the making for me. Don’t be afraid to dream big dreams. It may seem impossible, but it’s just a setup… for God to show you what He can do. He can take our dreams for our children and give them wings. I dare you to trust God. With Him, nothing is impossible.

*Hope and I made this video. Hope took most of these pictures! (Song is “You Amaze Us” by Selah).